Although some have claimed that  the killer was a Christian, and he did indeed claim to be one, his manifesto speaks for itself on this matter. He obviously cares little about Jesus or Christianity, merely using this as a facade for his hostility towards Islam. This is a count of some of the words used in his eight hundred thousand word manifesto (get it at this link): 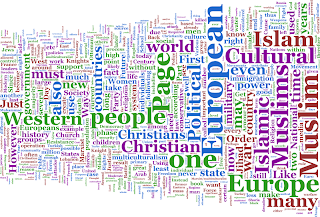 The manifesto mostly consists of his twisted world-view, and some contributions by other people as well, and is hardly worth reading. What’s interesting is however how towards the end he documents his descent into self-destruction the last couple of years. To quote:

“I spent three years were I focused on writing the compendium, 2083. During a 12 month period in the beginning, I also played World of Warcraft part time (which had been a dream for some time – hardcore raiding:).”

” Oh, and I’m also playing Fallout 3 – New Vegas atm after just finishing Bioshock 2. I’m also going to try the new World of Warcraft – Cataclysm when it is released in December. Time to dust of my mage…”

“My concerns and angst relating to this phase impacted my motivation, to a point where I had to initiate specific counter-measures to reverse the loss of morale and motivation. I decided that the correct approach to reversing it was to initiate another DBOL steroid cycle and intensify my strength training. I also spent some time locating and downloading some new inspirational music. A lot of new vocal trance tracks and some inspirational music by Helene Bøksle. In addition; I decided I would allow myself to play the newly launched expansion: World of Warcraft – Cataclysm.”

This “Christian” is apparently not afraid to buy hookers, either:

“I have reserved 2000 Euro from my operations budget which I intend to spend on a high quality model escort girl 1 week prior to execution of the mission.”

My analysis of the whole matter is that the man didn’t have much of an identity himself, since he had not assimilated that of his family, his country or his native religion. For him, Jesus didn’t mean anything, he only references Jesus in the context of a commentary on historical developments, and when it comes to alleged persecution in Islamic countries. It would appear as if he had very much indulged in life and lived in a very hedonistic way, but towards his late 20’s started to hate what he had become. He wanted to see himself as a pure knight when he was as hedonistic as people come. Then Islam started becoming the focus for his life, and he appeared to assume Christianity as a banner in order to fight this enemy of his. He proved that he was neither a Christian or a nationalist by killing 84 children and youth that day.