The other day I reported on the brutal and lethal attack on a corrections officer that transpired here in Sweden back on Monday. Now the identity of the perpetrator [shown on the right] has been publicly revealed, and the identity of the young woman who was going to be 25 this Wednesday has also become known through word of mouth. Something that might be of interest to Americans is that she has been confirmed as having attended an American university.

Karen Gebreab, born in Sweden in 1986, enrolled at Eastern Connecticut State University in the fall of 2005, allegedly studying social work according to an unconfirmed source. After graduating, she went back to Sweden and started work at the Huddinge jail, where she would be brutally bludgeoned to death only one year later. In this picture from the university, she’s just recently arrived, with her in the bottom left corner: 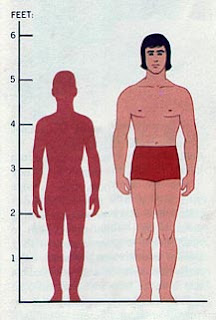 To an American audience, it might appear somewhat strange for a skinny university graduate to start work at a jail, but the penal philosophy in Sweden is based on communication and understanding. It’s believed that by maintaining a dialogue with the clientele behind bars, one can avoid violent confrontations. This belief would cost her her life, as she was walking an inmate almost twice her size so he could go for a smoke outdoors.

Head of Huddinge jail, Agneta Kempe, told media: “This is a girl everyone liked.” The majority of staff at this facility are women, just like Karen, with the jail showing little regard for the logistical problem of having them maintain order over violent male inmates. Karen herself was a woman of smaller stature than most at her 159 cm in height, or 5’2; the average adult male height is almost a feet more – 182 cm, or 6’0. Not to infringe on the seriousness of the event, but when I measure her height on the wall next to me and compare it to mine, I find it outright laughable that someone a head shorter than many of the inmates was actually expected to guard them.

The first reports that came in about the perpetrator had his age at 30, but now it’s been determined that his name is Erik Ljungström, that he’s 28 years old, with a long history of theft and violent crime behind him and a work history sketchy at best. This is his criminal record from his first convictions in the year 2000:

Arrested for attacking a childhood friend with a knife and committing arson in his own home.

It’s been reported that the man has also seen a psychiatrist for over ten years and is considered highly troubled, constantly bearing grudges against people he’s come in contact with.

Though the footage of the attack has not been released to the public yet, we now have a decent account of what transpired from the many sources in mass media. Since new newspaper articles are coming in as we speak, the curious reader can get the story from expressen.se, aftonbladet.se, dn.se or svd.se, Sweden’s four largest newspaper. This is how it went down at around 10.30 AM this Monday:

This Tuesday he was in court again, this time charged with murder. His lawyer Lars Hedsäter was interviewed for Expressen web TV and stated that his client “doesn’t feel too well,” and that “he’s a bit depressed.” Erik would not make any statement on his own guilt when asked by the court.

This whole affair has left a whole nation wondering just how this can happen, that’s for certain. On Monday, anti-feminist writer Pär Ström rhetorically wrote a piece for debate site Newsmill where he asked the question, “Should violent criminals be guarded by women?” And on the Internet underground forum Flashback, there’s been a thread with posts in the thousands, where people have dug up every information they can on the people involved and on the act itself, the way people usually do here since mass media has a habit of holding back information until it’s officially cleared. For a nation that abolished the death penalty a century ago, this act has many people calling for exactly that. To quote anonymous posters on this forum, representative of how many Swedes feel right now:

“I think he should be executed with a nightstick + punches.”
“Hell, he should be hanged to death. Get the death penalty.”

There’s also been an unexpected legal move, as chief prosecutor (equivalent of the D.A. in the US) Stefan Bergman is filing a lawsuit against the Prison Service itself, charging it with miscarriage of duty.

Yours truly has also posted a debate article to Newsmill, calling for a general prison reform and adopting American penal philosophy to Swedish institutions, which is now up at http://www.newsmill.se/artikel/2011/10/05/varf-r-vi-nu-m-ste-l-ra-oss-av-amerikansk-kriminalv-rd.

It’s my hope that Karen’s unfortunate death will be the final straw on the back of liberal crime philosophy. Indeed, this dastardly act has unveiled it in its full moral bankruptcy.