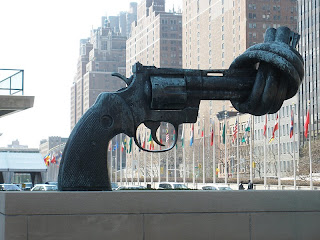 While not much of significance has taken place lately on the gun front since the Brady bill was passed back in 1993, now a new threat looms on the horizon – but this time its origin isn’t at the usual Capitol Hill, but at the United Nations Headquarters in New York.
The Knotted gun” sculpture outside the UN Headquarters, by Swedish artist Fredrik Reuterswärd.
Though many of you may have a vague idea about Swedish gun laws, let me give you a brief overview of the circumstances facing prospective gun owners in this not too freedom-loving monarchy. Though highly restrictive on personal liberty in many areas, Swedish legislation is neat and tidy, and just about all regulation concerning firearms is condensed into two documents – the Vapenlag [Weapons Law] of 1996, and the Vapenförordning [Weapons Ordinance] of 1996. It would be too verbose for this article going into every single detail about these Swedish laws, but here are a couple of facts about their contents:

We Apparently Need Even More

Though most people would consider these laws outright draconian, there are plenty of calls for even more strict legislation; something that just as as in the USA also takes place in Sweden when there’s a tragedy involving guns, such as the recent massacre by Norwegian terrorist Anders Breivik. On the 9th of August, an opinion piece by a child physician published in one of Sweden’s largest newspapers, called for a complete ban even on pistols. Measures such as these have strong support in the country’s medical community and among the political establishment. After another man had gone on a shooting spree last year in Malmö, with five attempted murders and one actual homicide, there was a complete media frenzy, and Minister of Justice Beatrice Ask took the opportunity to present her view on how one could come to terms with the problem of gun violence.

“Beatrice Ask also feels that an overhaul has to be made of the weapons regulations, that gun permits for example have to be subject to inspection and review.”

“The National Board of Health and Welfare has previously forwarded requests both for review of gun permits and that everyone applying for one shall also have to present a doctor’s certificate. There the Minister feels that mental illness is a factor that shall mean that you’re denied a gun permit.”

Following this, on 16 November, Ask also announced before the parliament that a new, stricter weapons law was in the works. To quote:

“The police shall also be able to request a statement from the social welfare board and the prison service along with a doctor’s certificate to determine whether someone is fit to own firearms.”

Hence, what this means is that you might have to show your criminal record sheet, whatever journal notes the social services has kept on you (and they play a significant role in Swedish society), as well as produce a certificate from a psychiatrist that you are indeed mentally competent (guilty until proven innocent).

Even With Gun Control, Criminals Still Own Guns

In spite of the tyrannical control of firearms, this has had little effect on the explosion in the violent crime rate the country has been suffering from during the last couple of decades, with a homicide rate that’s now at an historic all-time high, with 333 reported cases during 2010, or about 2/3 of the American rate; rape and assault rates are over twice as high as the American ones.
And whilst the government has always attempted to tighten the noose around legal gun owners after every incident of this sort, the vast majority of violent crimes are committed through the use of illicit weapons. The control of these illicit weapons isn’t nearly as successful as the one of their legal counterparts, as admitted in a police interview from 2005. To quote:

“The police estimate that thousands of firearms are smuggled into Sweden ever year. Every day on average, three serious crimes are committed with illicit firearms. Yet Customs has a hard time intercepting the gun smugglers. During 2003 and 2004, fewer than twenty firearms were seized by Swedish Customs workers.”

One of the most publicized shooting sprees in Swedish history, during which a man in mass media labeled Lasermannen – “The Laser Man” – shot at eleven immigrants and killed one of them, was also committed with an illicit weapon, hence would not have been affected by these control efforts. This doesn’t seem to bother the police though – somehow everything becomes a matter of preventing any sort of unlicensed gun ownership:

“According to Sonny Björk at the Stockholm county police, the cooperation is necessary. But he also feels the law needs to change to get at the growing smuggling.

– We have to up the sentencing guidelines for illicit weapons ownership so it doesn’t become appealing carrying a firearm. Today you gladly accept a prison sentence for the advantage of owning a firearm, Sonny Björk says.”

One thing you can count on never hearing in the public debate is criticism of the gun laws in place here. There is lamentation over that big crazy country in the west, however, where the people own all of these guns. In an editorial in Sydsvenskan shortly after Seung-Hui Cho shot up Virginia Tech University, Lennart Pehrson expresses his grievances over the in his view pretty much unrestricted gun ownership in the USA. Sweden is also the country where infamous Michael Moore is hailed as a truth-teller and a hero, where the state-TV is always keen on showing his documentaries repeatedly, Bowling for Columbine being one of the movies promoted on its web page.

The United Nations and You

So, what does all of this mean for you? Unfortunately, back in the late 1990’s, the UN started treading a path it hadn’t taken before – it started organizing international cooperative efforts on the matter of crime prevention, a task that till then had pretty much been the exclusive responsibility of the Interpol, at least on a global level. During the year 2000, the UN General Assembly passed Resolution 55/25, The United Nations Convention against Transnational Organized Crime, taking a major step towards cooperation on related matters as well.

The year after, this was followed by Resolution 55/255, The Protocol against the Illicit Manufacturing of and Trafficking in Firearms, Their Parts and Components and Ammunition. Through this protocol, the teamwork that was initially meant to concern itself with actual crime, now pursued other agendas as well – though the stated aim was to fight illicit weapons, it will be an effective tool in the hands of the UN and its member states at monitoring and controlling firearms ownership. To quote the protocol:

The wording on just what records will be kept is strikingly vague, stating merely “information in relation to firearms.” Will this require states to maintain national registries over all gun owners and their weapons the way Sweden does? To the best attempts of mine to find out, I just can’t tell. The subsequent article describes how the firearms will be made identifiable:

At the time of manufacture of each firearm, either require unique marking providing the name of the manufacturer, the country or place of manufacture and the serial number, or maintain any alternative unique user-friendly marking with simple geometric symbols in combination with a numeric and/or alphanumeric code, permitting ready identification by all States of the country of manufacture;”

Sweden is one of the countries pushing these protocols the hardest, alongside other globalist work groups tasked with combating global warming and similar, and the country both signed and ratified the protocols without any reservations unlike many other countries. Thankfully, the United States still has not signed these additional protocols, even though it had signed and ratified the parent convention in 2005 with some reservations.

That the United Nations is moving into the Interpol’s territory is alarming, since unlike the Constitution and general practice of the UN, the Interpol has clear limitations on its scope in its own Constitution. Article 3 of said Constitution reads as follows:

“It is strictly forbidden for the Organization to undertake any intervention or activities of a political, military, religious or racial character.”

This is to prevent it from its authority from being abused to pursue other agendas than what is traditionally considered crime prevention. For example, during the last two decades, many European states has severely restricted freedom of speech and made derogatory statements about ethnic groups and religions considered “hate speech,” punishable by prison – the toughest sentence so far took place in Germany a couple of years ago, when a man in his 70’s received a six-year sentence. Within the European Union, suspects are generally extradited between the member countries, but in spite of demands on the Interpol to do the same, the organization refrains from intervening.

The UN Convention has no such restrictions, on the other hand. For that reason, it’s of grave concern that protocols are now being added to it, one by one. One can easily foresee a future in which Socialists are able to clamp down on the two things they hate the most: Free speech and gun rights.
Less than a year ago, a special working group was established under this Convention. To quote:

At its fifth session, held in Vienna from 18 to 22 October 2010, the Conference of the Parties to the United Nations Convention against Transnational Organized Crime adopted resolution 5/4. In this resolution the Conference decided to establish an open-ended intergovernmental working group on firearms, to advise and assist the Conference in the implementation of its mandate with regard to the Firearms Protocol.”

Will this international cooperation one day mean American gun owners will face the same tyranny as the ones in Sweden? I sure hope not, but I do feel one needs to keep an eye on the United Nations and its global governance schemes.

View my other posts